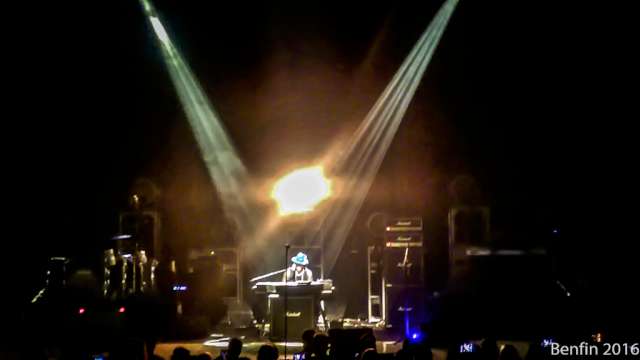 Excess is not a word I associate with the music of D’Angelo. When the extraordinary Black Messiah was released at the end of 2014, it was the arrangements that had me instantly intrigued and enraptured. As rich and multi-faceted as the instrumentation was, it was its meticulous, unorthodox treatment that made each song so compelling – intricate, restrained, purposeful and and so intently conscientious you knew these songs were the work of a truly masterful musician. So much of that record could have veered towards excess, and yet nothing on it feels out of place.

So here I was, at the Sydney Opera House Concert Hall, the perfect venue, one would think, to experience D’Angelo’s razor precision, but in the context of arranging a live performance. Not having sought-out many of D’Angelo’s live recordings of late, I guess I had the wrong impression.

Is letting your audience wait an hour and 45 minutes after the advertised playing time excessive? Maybe not if you’re Madonna, but the D’Angelo I’m here to see ain’t no diva. Or is he? I figured he must be working away backstage, making some last minute perfectionist’s tweaks.

The pre-show DJ fortunately had the crowd pretty well primed by the time D’Angelo hit the stage. Clad in a white hat and shiny black feathers, the singer had the punters up and dancing in an instant to the deliciously sinister mid-tempo funk of Devil’s Pie. The music didn’t stop as D’Angelo sidled backstage and bounced back sporting a glam metal silver and black guitar and ripped right into a ball tearing cover of Funkadelic’s Red Hot Mama. It seemed the infamously elusive, genius R&B songwriter is was in full rock star mode, telling the crowd “I know this is an opera house and all, but we came here to rock your socks off”. Hordes of excitable fans responded ecstatically.

Seven of D’Angelo’s Vanguard collective shared the stage, including two back-up singers and another two guitarists. That’s a lot of amped in, amped up musicians, and acoustically, the Concert Hall just ain’t built for hard rocking funksters. What came blaring (very loudly) out of the speakers was soul, R&B and funk with fat slabs of guitar and a shiny rock star veneer.

When D’Angelo’s stripping off various items of clothing and fist bumping the front row, his adoring fans are beside themselves. It’s a lot of fun for the first few songs, and the Concert Hall is positively pumping – an awesome sight, for sure – but, isn’t this supposed to be about the music? The music of one of the great R&B songwriters, multi-instrumentalists and producers of the last two decades. And with three overdriven guitars all vying and occasionally clashing with each other for attention, and the singer’s frequent Prince-channeling-James Brown yelping, the more cryptic melodies of songs like The Charade became virtually unintelligible under a cacophony of collective noise.

With its ponderous proportions designed primarily for orchestral music, volume has always been a massive problem with rock bands at the Concert Hall, and with eight dudes on stage blissfully cranked to the max, the sheer amount of decibels at times became overbearing.

And when it’s D’Angelo’s music that’s being compromised, that’s a real shame. There is so much subtlety and complexity to his work, and unfortunately, it was the venue’s sound, and the format of the band itself, that sometimes stripped away the most intriguing elements of his songcraft. Even the beautiful classical guitar that takes centrestage in Really Love sounded drowned out, relegated to the background.

But we get it, tonight was a party, a chance for a mysterious studio magician to step up and become an entertainer. And party the audience did, even if there were visible moments of boredom or confusion when they weren’t exactly sure what they were partying to.

After a long wait for an encore, (during which the sound levels seemed to have been successfully tamed somewhat) D’Angelo returned, sitting solo behind a piano, teasing out a few notes of Untitled (How Does It Feel) before faux-temperamentally walking away, leaving the audience baying for more. This went on, until we’d all cottoned on to what was about to happen, and then the band reappeared to turn his classic neo-soul masterpiece into a soaring 15-minute epic, where no drawn out chorus or heartfelt guitar howl felt excessive. This, this was the moment. This was glorious. No outlandish outfits or rockstar posturing made me feel like I was in the presence of a genius like this did. This was the music I had come to hear. Powerful, impassioned, brilliantly improvised and yet utterly effortless.

The encore continued for several more songs, finally finishing with a dramatic James Brown style rock n roll ending that proved that even the most lauded and elusive of musicians enjoy the chance not to take themselves too seriously once in awhile. Overall, it was a fun, frustrating, strange and occassionally exhilarating evening. I would give my right arm to see D’Angelo in a fine arts venue again with a completely different live arrangement, but the rock n roll façade at times did his songs a serious disservice.