It’d been awhile since I’d had a meal that really challenged my senses. If you count last month’s chilli hot wing eating contest at the Northbridge Hotel as a ‘meal’, then it had been about a month. Ben and I have a not-unwarranted reputation for eating, or at least attempting to eat almost anything put in front of us that could be vaguely interpreted as ‘food’, so after a lengthy easter weekend of terribly tame fare like chocolate eggs and barbecued chicken, it was time to give our taste buds a good Asian-style ass whuppin. 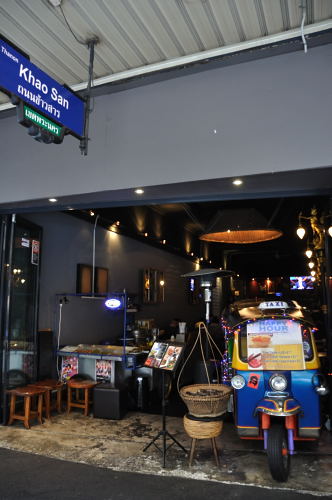 On Tuesday Ben and I ventured over to Thanon Khao San on the ‘Thaitown’ end of Pitt Street for some authentic street-style Thai cuisine. We’ve had good experiences with the restaurants around here (we love Saap Thai and Thainatown especially) since the area has become an eating-out hotspot for the Thai student population in the last few years. I’ve spent many months eating in homes, market stalls and festive banquets throughout Thailand, so when it comes to Thai food, I’ll admit I’m a little fussy. 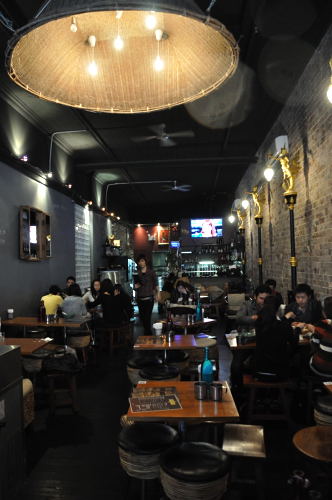 Although it’s named after Bangkok’s incredibly daggy backpacker precinct, Thanon Khao San reminds me very much of the young, buzzing Thai bars/eateries found in cosmopolitan, semi-hip Bangkok neighbourhoods like Pra Athit and Ratchatewi. Thai pop music blares from the bar at the back of the dining room, and there’s a very cool ‘Khao San’ street sign and an actual Thai tuk tuk parked out the front. There’s also a wonderfully authentic hawker stand facing the street, tempting passers-by with colourful, glutinous and gelatinous Thai sweets.

We order a few “safe” dishes – a slightly too sweet beef massaman curry with lovely Thai style roti and khao kaa moo, a sweet, fragrant dish of beautifully soft steamed pork with rice, cabbage and soft-boiled egg. What we’re really here to try is kaeng tai pla, an extremely pungent, salty and spicy soup from southern Thailand made from fermented fish innards. When we order the tai pla our waiter stares at us in surprise and at first tries to prevent us from proceeding with the order.  Eventually he gives in but warns us that we can’t send it back if we don’t like it. 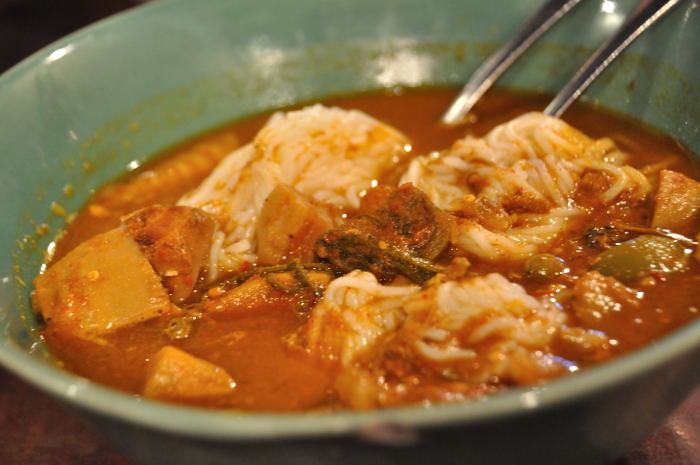 The kaeng tai pla comes with kanom jeen, squiggly white noodles made from rice flour. The smell hits as soon as the dish arrives at the table. This stuff reeks. It has a very potent fishy odour with a sour, heady whiff of fermentation. There are various, mostly unidentifiable scraps of things bobbing around in the muddy, soupy stew. I recognise the miniature Thai eggplants and the chunks of fresh bamboo shoot, and the rest of the floaters I can only describe as random, entraily bits and pieces. The primary taste of kaeng tai pla comes from a curry paste made from the preserved contents of the fish’s belly and it’s an extremely overpowering flavour. It tastes exactly like what you’d expect fermented fish guts to taste like. It’s still however, an extremely clean fish flavour and although tai pla is sometimes translated as “rotten fish”, there’s (thankfully!) no hint of putrescence in this dish.  It’s very, very salty and there is a tonne of hot, hot chilli in the stock as well as lots of sour tamarind and lime to cut through the tastebud–walloping, pickled organ cocktail. We use lots of the Thai basil, bean sprouts and fresh, bitter chopped cabbage provided to try and temper the taste of the soup and we manage to get through most of it. It’s definitely a taste that takes a lifetime of snacking on stinky dried Thai fish jerky to acquire. It was kind of hard to eat, but for me there’s something thrilling and evocative about experiencing such an intense inundation of flavour. I don’t think I’ll order kaeng tai pla from Thanon Khao San again but somehow it has made me love Thai cooking even more.