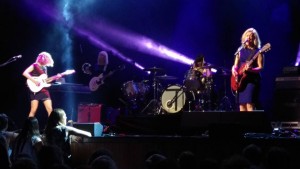 “We don’t talk much”. Meghan Remy is pointing out the obvious when she explains her lack of banter mid-set. Rhemy is main vocalist and producer behind the U.S. Girls moniker and tonight, the opening act for the Sydney leg of the recently reunited and enormously celebrated punk pioneers Sleater-Kinney. Along with her bandmate, backing vocalist Amanda Crist, they stalk the stage of the Concert Hall with audaciousness and intent, tiptoeing a line between disarming cheekiness and something far more weighty and severe. Remy leans out to scan the room and the Concert Hall’s conspicuous number of empty seats as if passing judgement, and then continues to strut, sashay and swagger about the oversized stage, while triggering backing tracks consisting of warped, sludgy samples of obscure 60s soul and deep disco.

On the surface, it’s a straight-up sampler and vocal performance, sounding swampy and alien in the huge and formal Opera House. The overcranked sampler just manages to keep from drowning out the two women’s vocals, which switch from soulful crooning to shrill and savage in an instant. In the hollow acoustic space of the Concert Hall, the sound coming from the lone sampler, all noise-and-reverb-soaked and way-too-loud, sounds monochrome, brutalist, almost ugly. It’s a harsh, brazen performance, best illustrated by the moment, during the piercing, sinister, New Age Thriller, a lone male guitarist in a bombastic white cowboy hat appears out of nowhere, playing a brief but comically labourious solo while Rhemy performs pelvic thrusts and crotch-grabs with wild abandon in case anyone takes their eyes off the show-stealing intruder for a second. It’s meant to be a moment of lighthearted fun, as well as a dig at the exaggerated masculinity of rock performance, but the fact that a respite from the weight of the band’s weirdness and intensity brings such a palpable sense of relief is telling.

Rhemy otherwise chooses not to interrupt what is basically an unrelenting wall of noise with small talk, but she does offer this towards the closing end of their set – “I first saw Sleater-Kinney when I was 14. Now I’m 30.” No further explaining is needed. The breadth and scope of Sleater-Kinney’s influence is immense.

While U.S. Girls undoubtedly left certain audience members in a state of befuddlement, there’s no confusion over the level of anticipation that grips the crowd tonight after Sleater-Kinney’s nearly 10-year absence from both recording and touring.

It’s basically impossible to have a conversation about tonight’s performance without a discussion about the venue itself, a subject that has been questioned and contested by a number of Sleater-Kinney’s Sydney fans over social media. Is the Sydney Opera House ever a truly appropriate venue for a high energy rock show?

If there’s an air of fervent excitement in the room tonight, it’s hard to tell as the seated audience wait patiently and placidly for the hugely hyped return of their favourite post-riot grrrl trio. Just as U.S. Girls’ Meg Rehmy was so affected by her experience of seeing Sleater-Kinney, it’s hard to underestimate the level of vehement fandom contained within the Concert Hall tonight. And yet the audience seems unable to overcome the staid history, the proscribed formality of the space. There are whoops and cheers as the band steps on to the stage, but still, the butts of around 2000 presumably highly enthusiastic fans remain firmly on seats.

And then Sleater-Kinney bring the noise. The band come rearing out of the gates with an unrelenting energy, ferocity and pace that barely lets up for the entirety of their set. From the pounding opening beats of Price Tag, nothing in the universe seems more captivating, more searingly badass than Janet Weiss pulverising the drums, Corin Tucker’s wailing vocals blistering through the cavernous space of the Concert Hall with shattering force, and Carrie Brownstein’s guitar, its deceptively simple hooks wrenching each song towards a tumultuous crescendo as they descend into an overdriven chaos of screeching solo riffage and guttural howls. The physicality of Brownstein’s performance has been much-admired over the years, and here at the Concert Hall, even in the face of a largely static audience, it’s as joyously unhinged and animated as ever, all slashing windmills, gravity defying high kicks and hair flying, often accompanied by a totally uncontained and utterly infectious grin.

The band’s contagious energy finally starts to seep into the crowd, and by the time a couple of songs from 2005’s monstrous The Woods are unleashed, most of the audience members, gingerly at first, are up and dancing, with more spirited pockets of the crowd spilling out into the aisles, jumping and flailing the way they might have seeing Sleater-Kinney years back at the Big Day Out or the Gaelic Club. And just like back then, the interplay between Tucker and Brownstein is the centre of attention, their contrasting vocals expanding each song’s emotional and dynamic range, the interplay of their twin guitar riffs as jolting and jarring as often as they are harmonious. The camaraderie between them, the playfulness and affection that shines through the barrage of a pummelling punk soundtrack is a magnificent thing to witness.

Around eighty minutes flies past and by the time the audience is baying for an encore (Modern Girl, a wonderfully warped Sleater-Kinney audience singalong, and an old school favourite, Dig Me Out) the Concert Hall is reverberating with thunderous applause. But given how profoundly personal, even transformational, Sleater-Kinney’s influence has been to so many of their fans, there’s a certain electricity that feels absent – a lack of connectedness and acknowledgement of some deep, shared experience within large parts of the audience. While to the Opera House’s credit, the band’s sound managed to be both appropriately loud and flawlessly balanced, the venue itself presented an emotional obstacle, that sadly, much of the audience never seemed quite able to overcome.

But the band’s performance itself? Phenomenal.