Your overenthusiasm = other people’s pain. How to be a music snob without being a social liability. 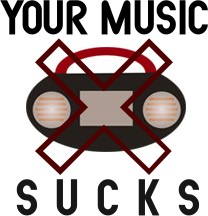 Sometimes, without even realising it, I’ll bait my partner into saying something I think is objectionable, in order assert a sense of superiority over him as a music snob.

Me: (putting on a track which I’ve spent a considerable part of the day picking out)

Some people would say this music is weird and boring

Of course, this kind of behaviour is totally shitty and condescending, and if you’re going to be both a music snob and a reasonably tolerable person, it’s the kind of thing you have to continually keep in check.

As music snobs we exist in this highly strung state between smug pride and embattled defensiveness. We feel self-righteous satisfaction in being one of the privileged few to know about Band X, yet we’re constantly taking some kind of personal offense to the fact that the staggering genius of Band X isn’t getting the public recognition it deserves. In this conflicted mind state, some of us have a tendency to make premature, derisive assumptions about others’ tastes or musical knowledge. We’ll sometimes let slip judgmental utterances (for example, responding to someone discussing their musical tastes with a shocked “REALLY?!”) without being immediately aware of how rude or arrogant or scathing we sound.

I don’t think anyone purposely sets out to be a music snob, but for some of us, snobbery is an unavoidable side effect of intense emotional and intellectual attachment to music and lifelong disappointment in the vacuous commercialism that characterises so much of it. It’s fine to embrace your inner snob, but unless you genuinely want to piss people off, it pays to be mindful of how you project it outwardly.
A few things for the slightly guilty music snob to consider:

If someone doesn’t think your enlightened cultural elitism is interesting and cool from the get-go, they never will. Secondly, as a genuine music lover, I want my opinions to be considered and respected. Making statements to undermine everyone else’s viewpoints before they’ve even had a chance to air them is just a shit thing to do, and will get you nowhere. A valuable discussion requires forethought and sensitivity. Thirdly, being a known music snob doesn’t excuse you from being socially inappropriate – it just makes people expect that you’re going to act like an insufferable ass.

Go ahead and advertise your unusual aesthetic leanings to the world by all means, but do your bit for the reputation of music snobs everywhere, and know when to tone it down, or keep it under wraps.

This entry was posted in Musings